Anthony Martial reminds Manchester United what they were missing 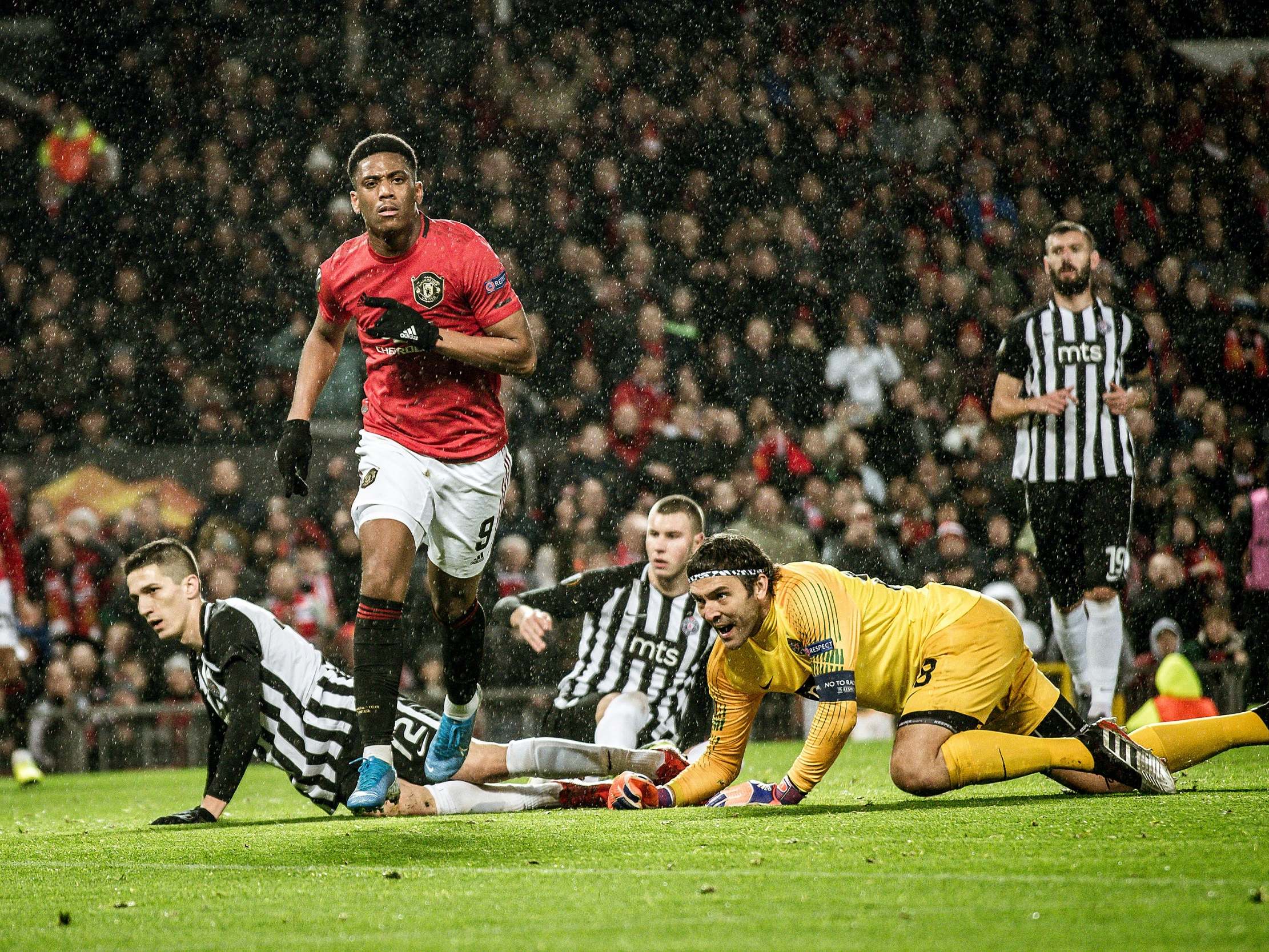 The first touch took the ball away from Starhinja Pavlovic. The second evaded a sliding challenge by Bojan Ostojic. The third stopped Pavlovic from saving face with a recovering tackle and the fourth rolled the ball past Partizan Belgrade’s goalkeeper. This is what Manchester United were missing during Anthony Martial’s recent lay-off.

Martial’s sublime individual goal, either side of Mason Greenwood and Marcus Rashford strikes, secured both a 3-0 win and a place in the Europa League knockout stages for Ole Gunnar Solskjaer’s much-improved United in front of a sparsely-populated Old Trafford on Thursday night.

It was the first time since the opening weekend of the Premier League season that United had scored more than once at home, the first since January that they had scored twice in the first half. Solskjaer has spent much of this season imploring his players to kill games off and score that “second goal”. For only the sixth time in 28 games, they did.

Is this the night when things finally fell into place for Solskjaer at United? Maybe, though probably not. Nobody should start getting carried away with a comfortable win over a team currently sitting fourth in Serbia’s top flight, a team that has lost three of their last five league games. The concerns raised by Saturday’s defeat at Bournemouth remain.

But at the same time, United deserve praise and plaudits for their most dominant Old Trafford display since beating Chelsea 4-0 in August. Partizan limited Solskjaer’s side to just one shot on target in Belgrade – Martial’s match-winning penalty – but put up little resistance in this reverse fixture.

Solskjaer’s line-up was close to full strength and a clear indication that he wanted qualification to be sorted once and for all. United face a 7,500-mile round trip to Kazakhstan’s capital Nur-Sultan at the end of the month. It will be a surprise if more than a handful of those to start this game play against Astana.

As one of only two established centre-forwards at Solskjaer’s disposal, Rashford is among those likely to be wrapped up in cotton wool. He has played more minutes than any other United player this season and that heavy workload told in the opening stages when he spurned two gilt-edged chances, firing the first wide and second over.

He atoned by turning provider for the opening goal, sparking panic in his opponents by a bursting at the Partizan defence then switching the play to the other side of the penalty area. Greenwood was waiting there, unmarked, ready to cut inside on his left foot and apply a composed finish past goalkeeper Vladimir Stojokvic.

It was Greenwood’s third goal in four starts, putting him equal with Daniel James as United’s third-highest scorer of the campaign to date. Though opportunities have not always been forthcoming for the youngster, he is taking them and must surely now be considered a genuine rotation options outside of the Europa League and EFL Cup.

The teenager played a major part in Martial’s goal, pressing Partizan’s defence relentlessly until the ball broke his team-mate’s way. United missed Martial’s intricate footwork and direct running during his lengthy lay-off with a hamstring injury, but here they witnessed the 23-year-old in full flow, zipping around helpless tackles until the delicate finish.

Barely half an hour had passed but the game was essentially won and progress secured. Rashford administered the death blow at the start of the second half, lashing at Ashley Young’s lay-off with his left foot and finding the top corner from a few inches outside the penalty area.

The only concern for Solskjaer at full time was an apparent injury to Scott McTominay, who limped down the tunnel midway through the second half. A slight sprain or two may ultimately be the cost of playing such a strong side, but it is a small price to pay for a comfortable win, an impressive performance and a place in the knockout stages.

“The Snub” – how UEFA’s snub to the Aus/NZ World Cup bid has highlighted a power struggle between FIFA and UEFA. : WomensSoccer
2

#OnThisDay 18yo Christine Sinclair scored her 1st international home goal at Varsity Stadium in Toronto, drawing Canada level with the 2-2 equaliser in the 58th minute against visiting USA : WomensSoccer
Back to top
This website uses cookies to improve your experience. We'll assume you're ok with this, but you can opt-out if you wish.Accept Read More
Privacy & Cookies Policy
necessary Always Enabled
non-necessary