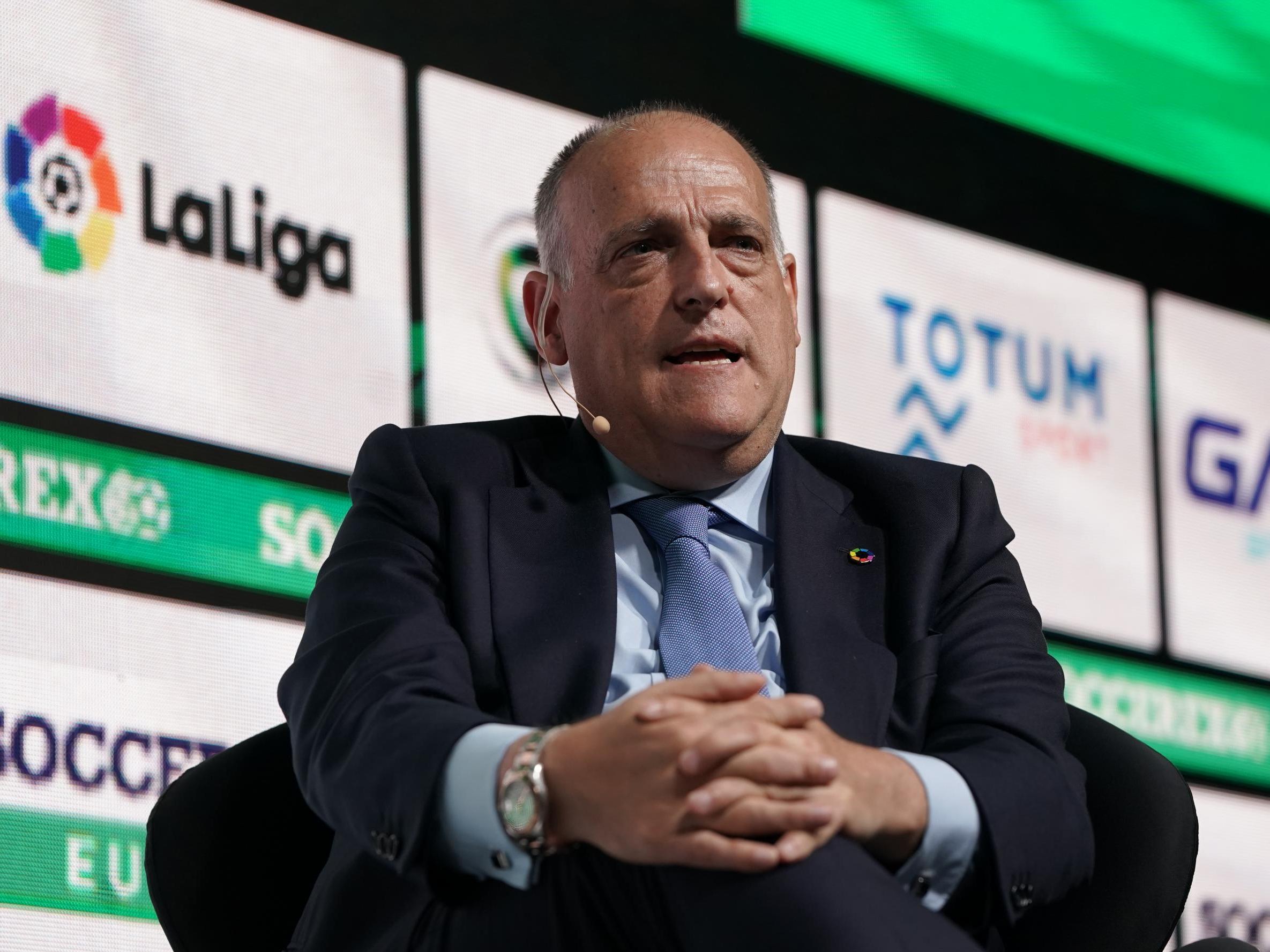 The 57-year-old official criticised the world governing body for becoming “competitors” as regards tournaments rather than mere “regulators” of the sport, as well as Real Madrid president Florentino Perez for discussing his own elite league idea without much thought for the distorting financial impact on the sport.

Tebas said such plans come from growing financial disparity in football, as he directly questioned the finances of Paris Saint-Germain in the latest Deloitte Football Money List, with the French champions still under a Financial Fair Play investigation.

The Liga president stopped short of saying Manchester City should be expelled from the Champions League amid their own ongoing investigation, but said “some kind of penalty need to be imposed”. He similarly criticised football’s relationship with states seeking to “whitewash” their image, as he questioned the Spanish federation’s staging of the Super Cup in Saudi Arabia, referencing the murder of Jamal Khashoggi.

Tebas was speaking in a wide-ranging briefing at the launch of La Liga’s new TV station in London last Wednesday. Expressing his enthusiasm for the competition’s “over-the-top” media format, and promoting its qualities, he spoke most candidly on potential consequences on all that of a new Club World Cup.

Fifa president Gianni Infantino reiterated his plans at the end of the 2019 event in Qatar, with the world governing body looking to expand the competition to 24 clubs for 2021 in China, and offer huge prize money to compete. That came shortly after it emerged Perez had staged talks with Infantino and other leading figures about an elite league for the clubs from the five major leagues.

“One challenge is the emergence of Fifa, who stopped being regulators and organisers for national teams and start to organise other kinds of tournaments which compete directly with the nationals,” Tebas said. “This is something that concerns me because we had a kind of an eco-system, a balance between the different leagues and continues and now we have an intruder who might disrupt that balance.

“I think it’s striking, a few weeks ago, Fifa was talking about how much would be paid if they went to China. They have been talking about redistribution of revenue, but haven’t discussed the impact this would have in different countries. Let’s imagine the two teams from Argentina, it’s €40-50m from a tournament such as this, this would have an impact on the Argentinean Super League.

“They haven’t looked at the consequences of these tournaments. When there’s going to be a problem with the [2022] World Cup [and the calendar] they’re going to organise a new competition. And I think that’s not the way forward. Having been re-elected, I am very critical of the Club World Cup, and how this whole process has come out.”

Tebas said the Spanish league fully supports Uefa president Aleksander Ceferin challenging Fifa on this, as he criticised Perez for a lack of concern for potential consequences of such plans.

“I don’t think Real Madrid as an institution are going to abandon its fans and give up on what it is doing currently and I think it would be a mistake, a very serious mistake, by Real Madrid and I think Florentino Perez in this case is not aware of the consequences and this form of leadership and the sort of reforms that a Super League could have and I don’t think he’s aware of the impact this would have on Real Madrid’s legacy.

“I don’t think there’s a real passion for these kind of events. I always ask why we should change a system of strong international competitions… if it’s not broken, why try to fix it? It’s like building castles in the sky.”

Tebas insisted such ideas are a result of the inflation caused by developments like “financial doping”, as he questioned Paris Saint-Germain’s revenues.

“When we have clubs being financed by states, that has an impact on salaries and that means in other countries with more strict economic controls like Spain and Germany clubs cannot actually ask the state for extra financing to pay those salaries.

“This causes inflation and people think about creating other competitions because Florentino Perez and other clubs are always saying we need more money to maintain our players, a lot of them say that.

“I was quite surprised when seeing the report issued by Deloitte, with the revenues of PSG of €600m that was in fifth place, I think. I’m sorry. And if we were to compare the figures to those five years ago, I mean, it’s incredible. It’s impossible to achieve that kind of growth in such a short space of time.

“Obviously, with PSG we were very aware of the accusations, because we have very solid evidence of this. In the case of Man City and the investigations that took place I’m not that aware of the circumstances of it as I’m not sure of the specificities of it.

“But obviously, a sanction needs to be imposed… I do know the Manchester City figures, where their income comes from and that figures don’t add up to a certain extent, if we take into account the market figure, so I think that some kind of penalty needs to be imposed.”

Tebas also raised questions about football’s relationship with oil states, and particularly the recent staging of the Spanish Super Cup in Riyadh.

“The Saudi Arabian government has a policy whereby they improve the image of the government through sport, whitewashing their image and we all have a responsibility there. One thing is to sell our broadcasting rights and the other thing is to go to that country where there are issues around human rights. We should not forget what happened in the Turkish embassy 18 months ago with another journalist [Jamal Khashoggi]. We should not forget these things. This happened in an embassy, not a bar and this is very serious, at least in my opinion. Money is not the only thing that matters.

“The idea of having a game there was very unfortunate because of the human rights issue and also what happened in that embassy. We are talking about going to a country to host different sporting events, sporting events that are very popular and are broadcasted and this is something different. It is not the same as maybe a British company that is going to build a metro line there. Building a railway line in Riyadh will not impact human rights but we are talking about whitewashing the image of a country. The money they paid for the Super Cup I’m sure they must have lost money, millions of Euros.”