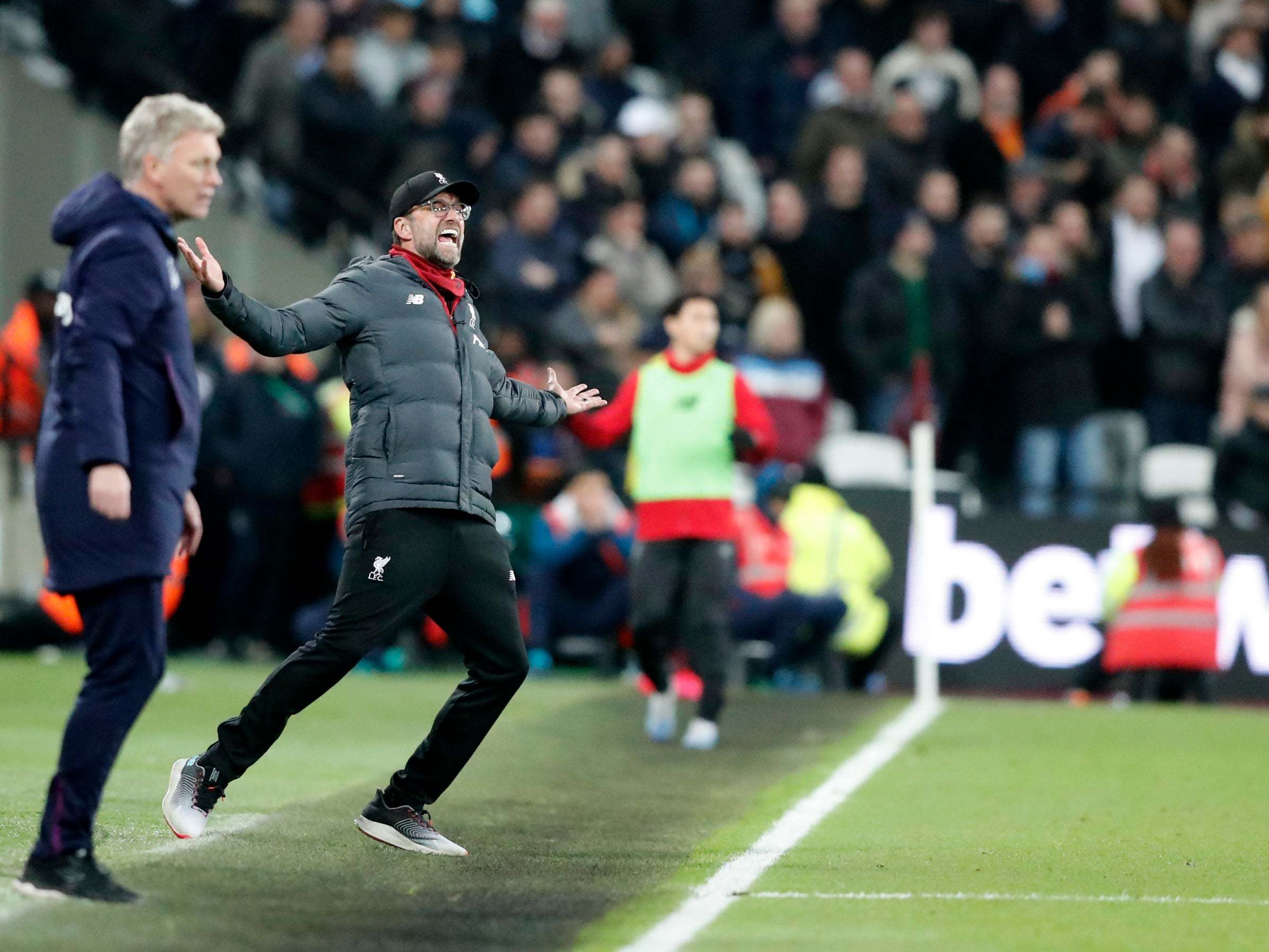 Jurgen Klopp enjoyed the result but not the performance after Liverpool moved 19 points clear at the top of the Premier League with a 2-0 win at West Ham.

Mohamed Salah‘s first-half penalty and Alex Oxlade-Chamberlain’s second-half strike swept the Hammers aside as Liverpool continued their inexorable march towards the title.

The Reds were not at their devastating best, but they did not have to be to make it 23 wins from 24 matches and stay on course for a 19th league title, and a first for 30 years.

“It was not a brilliant performance. I wish we’d done better, but I’ll take it like it is,” said Klopp. “If it was easy to win this amount of games a lot of other teams would have done it. It was a tough game. We’ve played some super games, this was just a game.”

Victory over West Ham, in a match rearranged from December, meant Liverpool have now beaten every other team in the league this season. But statistics and records do not matter to Klopp, who added: “I don’t feel anything like that. I wanted to win the game but nobody was thinking it was 18 teams, let’s make it 19. When you jump in the water you don’t breathe for 38 games then you come up and look around. That’s how we see it.”

West Ham held out until 10 minutes before half-time, when a scramble in the penalty area ended with Issa Diop bundling over Divock Origi. VAR had a good look at a replay of Roberto Firmino’s hand potentially brushing the ball in the build-up, but the spot-kick was confirmed and Salah thumped it home for his first goal in the capital since he netted at Crystal Palace 22 months ago.

Manuel Lanzini missed a gilt-edged chance to equalise before a mix-up between Mark Noble and Arthur Masuaku allowed Salah to smuggle the ball away and thread a pass to Oxlade-Chamberlain, who finished clinically.

To their credit, West Ham’s heads did not drop like they have in the recent past and Declan Rice forced two excellent saves from Alisson, with Trent Alexander-Arnold putting the rebound from the first against a post. Salah also struck the woodwork late on and Lukasz Fabianski saved from Naby Keita but West Ham just about kept the visitors at bay.

It may be a small crumb of comfort but, while Liverpool disappear into the distance at the top, the hosts did at least avoid the four-goal defeat which would have seen them drop into the bottom three.

David Moyes, whose side face a crunch visit from Brighton on Saturday, said: “I thought the players did a good job defensively. We were playing against a really good team and we made opportunities and created chances against a tough team so overall I’m pleased.

“They’re as good as there’s been around. It’s very difficult when you’ve been manager of Everton and Manchester United to say that but Liverpool are an excellent side.”

“The Snub” – how UEFA’s snub to the Aus/NZ World Cup bid has highlighted a power struggle between FIFA and UEFA. : WomensSoccer
5

OVER HALF OF PEOPLE LIVING WITH HEALTH CONDITIONS FEEL ANXIOUS ABOUT LOCKDOWN LIFTING
Back to top
This website uses cookies to improve your experience. We'll assume you're ok with this, but you can opt-out if you wish.Accept Read More
Privacy & Cookies Policy
necessary Always Enabled
non-necessary