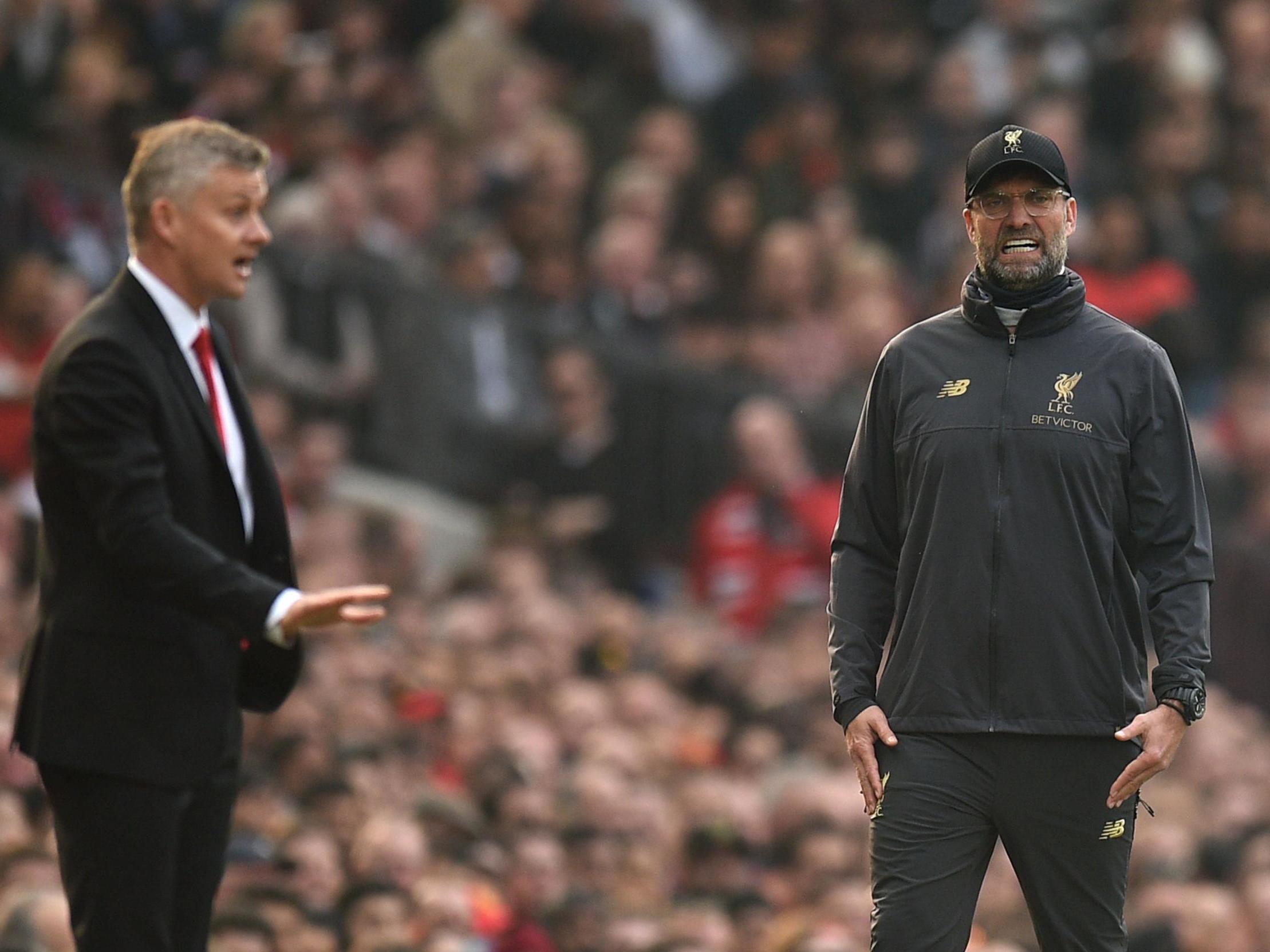 Manchester United travel to Anfield on Sunday as the only team to have taken a point off Liverpoolthis season in the Premier League.

Ole Gunnar Solskjaer’s side currently sit fifth in the Premier League, 27 points behind the Reds, and know a victory this weekend is needed to help keep their top-four hopes alive.

United have won three of their last four top-flight outings, and will be looking to build on their win over Norwich the last time out in the Premier League.

Liverpool are unbeaten so far in the Premier League, with 20 wins from their opening 21 games.

With 61 points from a possible 63, the side appear certain to end their 30-year wait for a title.

Liverpool vs Manchester United kicks off at 16:30 on Sunday 19 January.

The game can be streamed online via the Sky Sports App and Sky Go from 4:00pm

Jurgen Klopp has said he is optimistic that Fabinho will return from injury on Sunday after being side-lined for the last two months with an ankle problem.

Joel Matip, whose last appearance was in the October draw at United, and Dejan Lovren are also likely to return having recovered from injuries.

Ole Gunnar Solskjaer has confirmed that Eric Bailly, who has not played a first- team match for close to six months due to a knee injury, could be named in this weekend’s squad.

Luke Shaw’s and Jesse Lingard’s involvement in this weekend’s clash is in doubt after both being reported as ill.

Axel Tuanzebe, Marcos Rojo, Scott McTominay and Paul Pogba are all still out with injury, with no precise date given as to when they will return.

Liverpool are the likely winners of this clash.

The Reds have not lost a league match at Anfield since April 2017 and are unbeaten this season.

But with a full week separating Liverpool’s win over Tottenham and their meeting with Manchester United, Klopp has warned that the break in rhythm might be a challenge for his players.

United are the only team to take a point from Klopp’s men this season, but will be underdogs this time around.

18 mins: The first goal could be crucial. Liverpool have it so can Man Utd respond? Not by the looks of that. Liverpool overpower United again and win another free kick. It’s whipped into the box and van Dijk makes the run, he almost makes it to the ball on the far post for a tap in but misses out by mere inches.

14 mins: GOAL! Liverpool win another. Alexander-Arnold whips it into the centre of the box, van Dijk jumps over Harry Maguire, wins the header and finds the back of the net. Liverpool lead at Anfield!

12 mins: Man Utd have seen more of the ball in the opening stages but they haven’t done a lot with it. Martial runs the ball into the box from the left hand side and passes it back to the edge of the box. When the ball comes back to him he’s caught offside.

A Man Utd break away is cut out by Henderson in midfield. Good play from the Liverpool man.

9 mins: The visitors started off strongly but Liverpool are slowly and surely growing into the game. They win the first corner of the game and Alexander-Arnold plays it short. The cross comes in but is cleared by Pereira.

The ball bounces around in midfield and Matic goes for the ball with a high leg and hits Wijnaldum in the face. Rightly so he gets a yellow card and Liverpool have a free kick. The set piece is sent into the box for Mane but United have a high line and he isn’t able to get to the ball in time to stop it from going out of play.

6 mins: United get free on a mini break with James bombing down the right side as Matic plays a good ball up top. Martial runs into the box and James attempts to pick him out but Liverpool react quickly and van Dijk is able to intercept.

3 mins: Man Utd have set up with a back four and Brandon Williams is sitting in front of the back line, over on the left when United have the ball. When Liverpool take possession Williams drops back and it becomes a back five.

The visitors win a free on the right side of the pitch in Liverpool’s half. Fred taps it to Pereira whose cross into the box is poor and Liverpool boot the ball away.

Kick off: Man Utd get the game underway, attacking the Kop in this first half. They send the ball long searching for Martial but Alexander-Arnold intercepts and clears for the hosts.

The teams have made their way out onto the pitch at Anfield. “You’ll never walk alone” is played over the stadium speakers and the Liverpool take up the tune in full voice.

Liverpool vs Man Utd is up next…

Ten minutes to go until kick off. You can’t really look past Liverpool winning this game and winning it well, they’re an exceptional side at the top of their game.

But, but Man Utd do funny things to Liverpool teams, is it the history? the rivalry? Who knows but Man Utd will give them a tough game.

Even so, I think Liverpool will have enough to claim the three points. The first goal could be crucial.

Harry Maguire has had a pre-match interview with BBC Radio 5 Live and he said: “We’ve been a bit too inconsistent this year. That has been our problem. But against the top teams we have been really good, apart from the first half against Arsenal. They put us under a lot of pressure and we need to handle it a lot better than we did that day. At Anfield it will be the same. The atmosphere will be up and they will be trying to out us under pressure and we need to handle that a lot better.

“The louder the atmosphere the better. It’s a great ground to go and play at and it’s a great ground to go and get a result at. You have got to embrace these moments. You want to play in the big games, the high pressure games. Go out, look around in the tunnel, embrace the atmosphere and go and perform on the stage where, if you score the winning goal or get a great result it will be remembered in years to come.”

Gary Neville, on Sky Sports, says Manchester United need to play in moments today. He expects Liverpool to dominate and wants United to take the chances they create. They’ll get four or five moments and United need to capitalise on them.

The warm ups are underway at Anfield, Man Utd come into the game as massive underdogs with most of the pundits writing them off before the match has even begun.

Yet there’s enough fire power in their team to cause Liverpool trouble if the league leaders aren’t at their best.

“It’s the knock he got against Wolverhampton, it’s been bad enough to keep him out.” Ole Gunnar Solskjaer explains the absence of Marcus Rashford:

The Norwegian is the only manager to deny Jurgen Klopp’s side victory in the Premier League this season, with elements of the Reds resembling great United sides of the past:

Man Utd come into the game with a new club captain after Ashley Young was sold to Inter Milan in midweek.

Harry Maguire is the man to take over after just six months at the club and Ole Gunnar Solskjaer explained his decision by saying: “He’s had a great impact and he’s a great personality. He’s a leader, we’ve got leaders in the group, different types of leaders. We’ve got Marcus Rashford, who’s a young boy showing leadership skills. We’ve got Scott McTominay, David De Gea and Juan Mata, they’ve been around for so long now. Harry has come in and he’s paying every game, he’s fit and he’s leading that dressing room.”

And of course the players are always up for it:

Games at Anfield are always glorious occassions but there are certain matches that the stadium comes alive for. European nights, Merseyside derbies and of course whenever Manchester United come a calling.

Fabinho’s return puts Oxlade-Chamberlain’s place in the team in jeopardy, but the team’s needs come first for the Englishman:

That’s an interesting selection from Ole Gunnar Solskjaer. Luke Shaw and Brandon Williams are both in the starting XI. Will Man Utd set up with a back five with Shaw as a wingback and Williams taking the left centre-back role?

Or is Luke Shaw going to play as a winger out on the left side of the midfield? Either way the midfield looks like the weakest area for Man Utd.

Jurgen Klopp names an unchanged team from the starting XI that defeated Tottenham 1-0 last weekend. As expected Fabinho and Joel Matip are both named on the bench.

Man Utd have three changes to the side that saw off Wolves in the FA Cup third round replay. David De Gea comes back in goal, with Luke Shaw back in defence. Andreas Pereira also returns to the midfield. Sergio Romero, Mason Greenwood and Juan Mata drop to the bench.