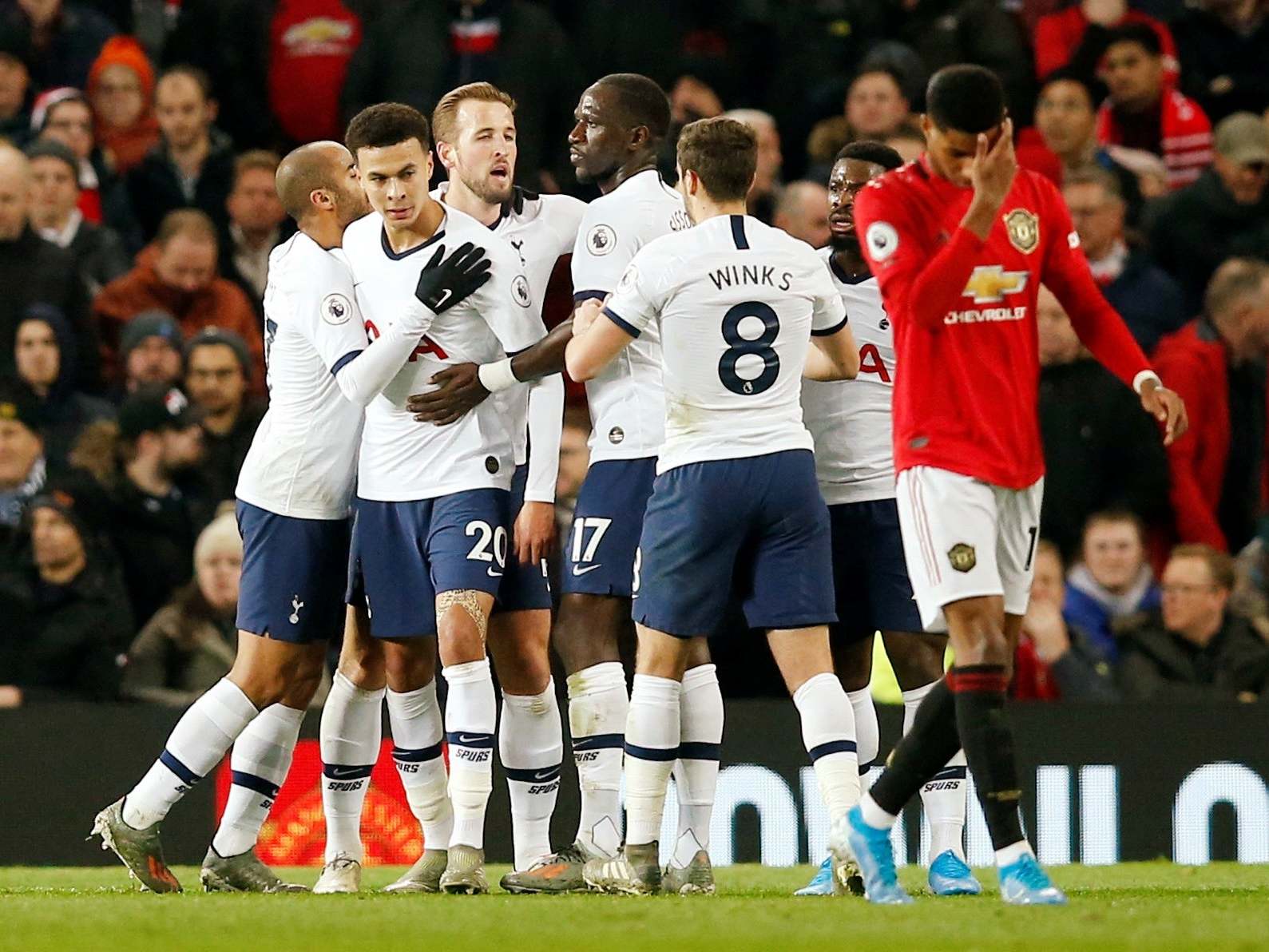 Follow all the action live as Jose Mourinho returns to Old Trafford as Tottenham Hotspur take on Manchester United.

Another defeat for Ole Gunnar Solskjaer could spell the end of his tenure at United, with the club currently 10th in the Premier League, having won just four of their 14 games this season.

Spurs’ resurgence under Mourinho continued with 3-2 victory against Bournemouth last weekend, with Dele Alli spearheading three successive victories since the Portuguese’s return to management.Follow live coverage of the game as well as Chelsea’s match against Aston Villa below:

Man Utd have an excellent start to the match and could have had more than one goal but since the equaliser seemed to lose their mojo. Can they rekindle it in the second half?

At half time, the scores in both games are:

More goals to come in the second half methinks

45+3 mins: Honours even at Old Trafford as the first half comes to an end. Man Utd took the lead and a moment of brilliant control from Dele Alli sees Tottenham draw level when they really shouldn’t be.

45+2 mins: Rashford wins a corner for United in the last minute of the first half. Fred whips it into the box but Sanchez heads it away.

The half time whistle has gone at Stamford Bridge.

45 mins: Bad news for Man Utd as Marcus Rashford is down following a tough collision. The physio comes on and helps him off the pitch to recover. Three minutes more to play at Old Trafford.

45 mins: Two added minutes in the first half as Reece James wins a corner. It comes into Zouma who heads the ball into the deck and it bounces high but Heaton claims it.

41 mins: GOAL! Villa are level at Stamford Bridge with a beautiful ball from El Mohamady and a very lucky finish from Trezeguet. El Mohamady puts the ball into the box, Trezeguet makes his run and heads the ball down, it hits his shin and goes in next to the near post.

39 mins: GOAL! Vertonghen whips a cross in to Kane but it is flicked on to Aurier. He puts the ball back into the box. Dele Alli’s first touch is glorious as he sends the ball over his own head towards the goal cutting out all the defenders. He follows it up with a solid shot and finds the back of the net.

36 mins: Reece James takes a big chance by squaring the ball into his own penalty area. Trezeguet is aware and he tries to intercept but Zouma beats him to the ball and boots it away. James can thank his fellow defender for that one.

33 mins: Despite having an impression forward four of Kane, Son, Moura and Dele, Spurs have been surprisingly lacklustre in front of goal. Aurier puts a ball into the box that De Gea claims.

Harry Kane is dropping deeper and deeper to get on to the ball.

33 mins: Chelsea split Villa apart and break quickly. Kante sends the ball forward to Tammy Abraham who has Pulisic on his left. As he reaches the box he squares the ball but a back tracking Konsa intercepts and boots the ball out of play.

30 mins: Spurs again lose possession of the ball before they can trouble David De Gea, the visitors don’t look comfortable at all.

30 mins: Mount and Willian bring the ball down the right wing and get it all the way to the area. Mount passes it into the box for Abraham whose first touch takes the ball away from him and Villa boot the ball away.

27 mins: Rashford is on fire at the moment. United maintain a pressured attack and Lingard dinks the ball into Rashford in the box. He shoots again and Gazzaniga palms the ball behind for a corner.

Spurs clear the corner at the near post but they’re under consistent pressure at Old Trafford.

24 mins: Off the bar! Marcus Rashford comes close again as the ball is played out him on the left side of the pitch. The Old Trafford crowd encourage him to shout and he obliges with a dipping shot, Gazzaniga gets a touch on the ball, enough to tip it onto the crossbar and away.

24 mins: GOAL! Chelsea have been probing and probing and now they’ve got their reward. Reece James sends a great cross into the six yard box. Bewilderingly Abraham is all on his own and he has a free header to put past Heaton.

18 mins: Man Utd have a free kick in a dangerous area. 26, maybe 27 yards out. MArcus Rashford hits it and tries to swing it into the far corner. The ball curls too much and the shot goes wide.

18 mins: McGinn hits Willian with a crunching tackle from the side but he escapes major punishment. Chelsea send the ball quickly down the right wing where Reece James exerts himself in a chase he was never going to win and the ball goes out of play.

Chelsea continue to search for the killer final ball that has eluded them so far.

15 mins: Harry Winks is shown a yellow card for a sliding tackle on Daniel James. As the tackle comes in both players fly off the pitch and James bangs his head in a collision with Jose Mourinho.

He’s checked over and is fine to continue.

12 mins: Spurs win a free kick about 25-yards out. Harry Kane is the only man over the ball and he sends it over the wall but there isn’t enough dip on the ball and David De Gea watches it as it goes over the bar.

Please allow a moment for the blog to load.

Scott McTominay is expected to make his return from an ankle injury, while Jesse Lingard could start after Juan Mata’s disappointing performance against Villa. The game comes too soon for Paul Pogba, though, who Solskjaer confirmed is not yet ready to return.

Harry Winks could replace Tanguy Ndombele in midfield, while Danny Rose could return to counteract United’s pace down the flanks.

The match is on Wednesday 4 December.

The match gets underway at 7:30pm.

The match will be available towatch and stream on Amazon Prime.

The match will be frenetic with Mourinho’s former players desperate to stick it to him, while the manager himself will urgently want to get one over United at Old Trafford.

However, the two sides are on such dramatic different planes of momentum at the moment that, although United could start with a renewed vigour and desire, Spurs’ quality and form should ultimately shine through in a hot-blooded encounter.

To watch any of Amazon’s fixtures for free, sign up for a 30-day Amazon Prime trial byclicking here, which can be cancelled any time.

Atletico Madrid vs Liverpool prediction: How will Champions League fixture play out tonight?
5

LIVE Transfer Talk Man Utd’s Smalling may spurn Roma for Everton Spurs
Back to top
This website uses cookies to improve your experience. We'll assume you're ok with this, but you can opt-out if you wish.Accept Read More
Privacy & Cookies Policy
necessary Always Enabled
non-necessary