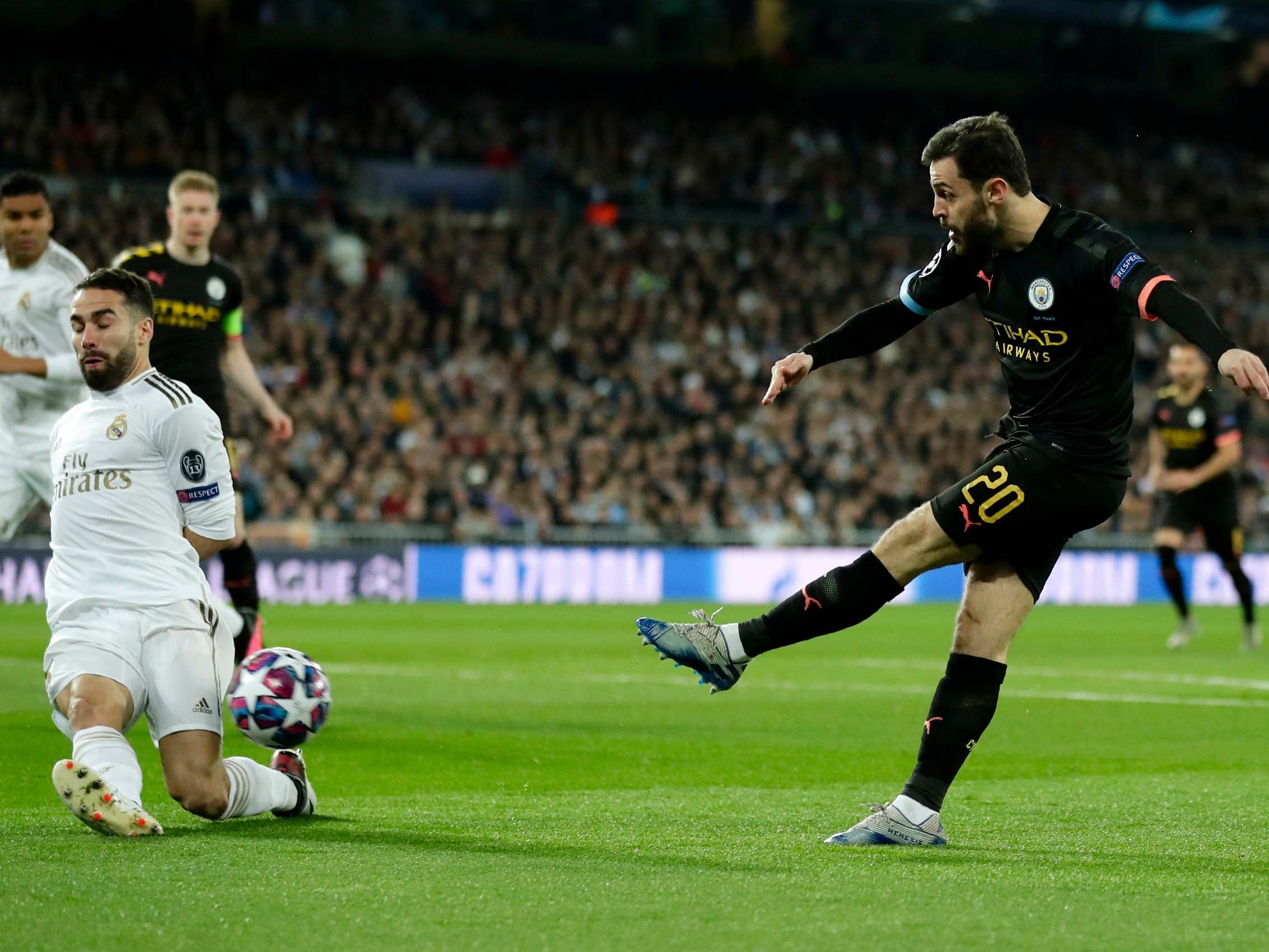 Real Madrid host Manchester City at the Bernabeu tonight in the first leg of their Champions League round-of-16 tie.

Pep Guardiola and Zinedine Zidane meet for the first time competitively as managers and both know what it takes to become European champions. City have never beaten Madrid, but the pressure is on Guardiola to deliver in a competition he hasn’t won since 2011.

Eden Hazard is out after fracturing an ankle in the shock Liga defeat by Levante last weekend, while City welcome back Raheem Sterling to the fold following a hamstring injury. Follow all the latest live:

27 mins: Jesus wins the ball off Carvajal in his own half and goes on a good run into the box. De Bruyne is the only CIty player up with him so Jesus takes it himself but his run is stopped by Varane. De Bruyne wins the ball bck but Mendy gives away a free kick to Madrid.

24 mins: Man City have been a tight defensive unit so far. Real are finding it difficult to create any spaces or get the ball into the box. That Man City attack will have them worried about over-extending themselves.

21 mins: Denied! Man City make their move quickly, the ball comes to De Bruyne who feeds it into the box for Jesus. Jesus gets to the ball puts it onto his right foot and drills one at goal. Courtois gets his hands up quickly and makes the save.

18 mins: Isco chips in a cross attempting to find Benzema but Benjamin Mendy gets to it first and heads it away. Varane collects the ball and shoots but it goes wide.

De Bruyne has moved out to the left with Jesus making his way into the middle of the forward line. City have their best period of possession but they’re in no hurry to get forward with the ball.

15 mins: Madrid try to find Isco as he makes a run in between Man City’s centre-backs. Ederson comes flying out of his area and boots the ball away before Isco reaches it.

12 mins: It’s a rare sight to see Manchester City defending more than attacking but that is what facing Real Madrid does to sides.

Mendy gets forward for City and wins a throw in deep in Madrid’s half. City want some time on the ball but Laporte’s cross field ball is too high for Bernardo to control and they give the ball away.

9 mins: Gabriel Jesus catches Carvajal in possession but Varane uses his pace to beat Jesus to the lose ball and end a potentionally dangerous attack from Man City’s striker.

6 mins: Neither team have found their grooves yet. Madrid have tried a couple of through balls on the left wing but the passes have been too hard giving the runnners in behind no chance to get to them. Man City are working hard to try to win back the ball.

3 mins: Real Madrid have only lost once at home all season so Man City have their work cut out tonight. Luka Modric gives the ball away but City are unable to capitalise as a long ball forward finds it’s way into the hands of Courtois.

Kick off: Real Madrid get the match started, the Bernabeu is packed out and the atmosphere is electric. Man City win the ball quickly and Mendy is able to cross the ball into the box. Sergio Ramos clears it to Bernardo who shoots but has the shot blocked.

The teams make their way on to the pitch with all the pomp and ceremony that the Champions League brings. Man City need to overcome a team that has won this competition more than any other if they want to progress to the quater-finals. Can they do it?

Real Madrid vs Man City kicks off next…

Pep Guardiola has answered the question on how to beat Real Madrid at the Bernabeu:

“Score five goals in 10 minutes!” he said before adding:“Just try to be ourselves, play as good as possible in this amazing scenario. It is the Champions League and if you want to do something good you have to play this kind of team.”

“The only way we can beat this team with incredible history is on the pitch.”

He also explained why Fernandinho and Sterling start on the bench saying:“I decide for him and for the players this line up. That is all. Fernandinho is incredible at set pieces but he is not in the top, top, top conditions.

“He [Sterling] could have played from the beginning but 90 minutes I do not know so that is why I decide.”

The warm ups for Real Madrid:

Zinedine Zidane has given his say on what it’s like to face a Pep Guardiola side saying:

“At the end of the day, it’s a football match, that’s what people want to see. It’s a great fixture, we’re happy because these are the games we want to play in.

“I say Guardiola’s the best coach in the world because he’s always shown it. First at Barcelona, then at Bayern, and now at City. There are many coaches in football, but for me personally, he’s the best.

“We’re not scared of playing against Guardiola. I was with him for a few days when he was at Bayern, discussing how to manage a team, and he was very honest, open, and I learned so much from talking to him.

“We know we’re up against a very good side, they’ve shown it time and again and they’ll come here to play football.”

15 minutes to go until kick off, who’ve you got?

Man City have never beaten Real Madrid but there’s a first time for everything.

The warm ups are underway:

All the English sides have lost the first legs of the last-16 so far. Tottenham lost 1-0 to RB Leipzig and Aletico Madrid squeezed past Liverpool with the same scoreline.

All the English sides have lost the first legs of the last-16 so far. Tottenham lost 1-0 to RB Leipzig and Aletico Madrid squeezed past Liverpool with the same scoreline.

How can I watch on TV?

The game will be shown live on TV in the UK, and can be watched on BT Sport 2 – coverage starts at 7pm.

Can I stream it online?

Yes, BT Sport subscribers will be able to stream the match online via the video player and BT Sport app.

Raheem Sterling is expected to be available for selection, while Leroy Sane, who damaged his anterior cruciate ligament in City’s Community Shield win over Liverpool is unlikely to be risked.

Belgian star Eden Hazard will be unavailable after fracturing his ankle for the second time in Madrid career at the weekend. Marco Asensio is still recovering from a serious knee injury which he suffered during pre-season, whilst Gareth Bale is likely to feature after missing the Levante game through illness.

The match kicks off at 8pm GMT at the Santiago Bernabeu Stadium.

Real Madrid 1-2 Manchester City. Guardiola has the nous and the firepower at his disposal to pull off a big result.