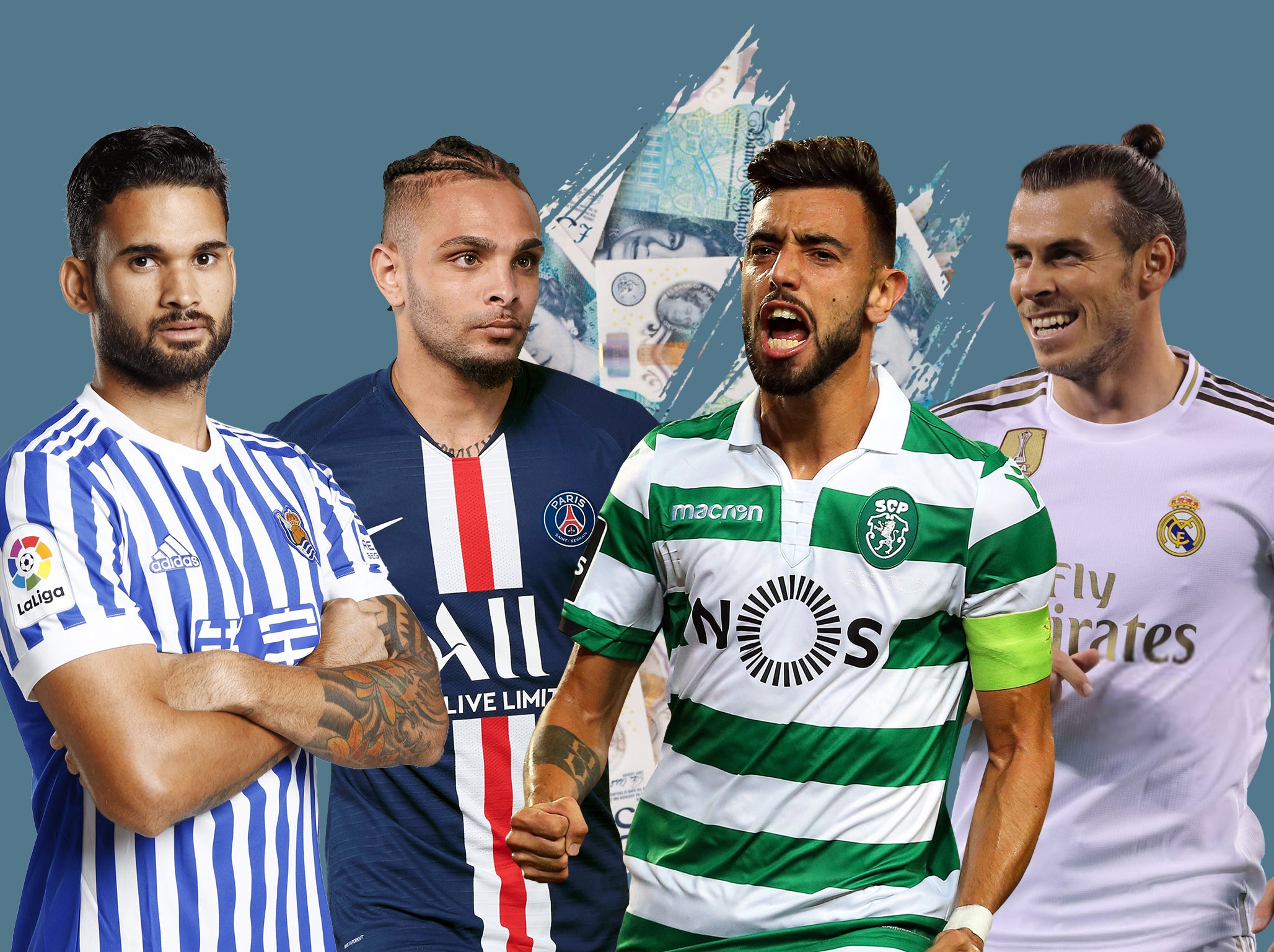 Manchester United,Liverpool,Arsenaland more all remain active in the market with just a week remaining, so welcome to our live coverage of today’s latesttransfer news, gossip and done deals as we bring you the very latest rumours from around the continent.

It still remains uncertain whether Manchester United will sign up Sporting Lisbon skipperBruno Fernandesas both clubs haggle over a fee, with Sporting holding out for as much as £68m in total, while United appear reluctant to go north of £50m. Real Madrid star Gareth Bale was linked with a loan back to Tottenham, but that has been dismissed by the Welsh forward’s agent. Spurs still look keen to buy though, with Willian Jose the next man in after Gedson Fernandes. Chelsea, too, are active and seemingly keeping Frank Lampard on edge despite their transfer ban being lifted since before the window open. No additions to the first team have been made, with Wolves, at least, and feasibly many other sides closing in on the Blues in fourth in what promises to be a frantic race to qualify for the Champions League.

At the other end of tha table you will have Newcastle, Brighton, Burnley, Aston Villa and West Ham all trying to remain out of the relegation zone and Bournemouth, Watford and Norwich City all looking for that one move to put them over the top and escape the fall to the Championship. Undoubtedly now, a week out, momentum will start to pick up, so stick with us and follow all of the latest transfer news, gossip and done deals live below.

Eddie Howe wants goals as he plots the Cherries way out of trouble. To get them it appears he has money to spend with a forward and/or a winger a priority. Lyon’sBertrand Traorelooks to be his top target with the French club looking for around £35m to do a deal for the former Chelsea man. Out wide Borussia Dortmund’sJacob BruunLarsen has been mentioned with a loan move the likeliest outcome for the Danish youngster.Nathan Akelooked a near-certainty to be departing this month but former club Chelsea appear to have cooled their interest. For now at least.

The carousel of options at the Nou Camp is not done yet though, with Olivier Giroud an alternative and a more short-term option.

The Chelsea star was set for Inter Milan, but Matteo Politano will not swap clubs with Leonardo Spinazzola and head to Roma.

Instead Napoli are willing to take the Inter forward, but another deal that could run adjacent to that is Fernando Llorente heading in the opposite deal, which would leave Giroud out in the cold.

But Barcelona, should they not want to spend big on a striker this month, could offer the France forward a lifeline.

Barcelona will move for Rodrigo, instead of Pierre-Emerick Aubameyang, claims the front page of today’s Mundo Deportivo.

The Valencia star could directly replace Luis Suarez as the side’s No 9.

Paco Alcacer will replace him at the Mestalla to satisfy Los Che.

A new right-back is top of Graham Potter’s wishlist with Martin Montoya’s form patchy at best of late. Tottenham’sKyle Walker-Peters, available for around £12m, is a target as is Nottingham Forest starletMatty Cash. On-loan midfielderAaron Mooywill make his loan move from Huddersfield Town a permanent one with a fee of around £5m set to get it done. Ex-France under-19Billel Omrani, rated at around £3m by his club CFR Cluj, is another possible arrival before the window shuts.

Dean Smith finally has the striker he craves, Tanzania internationalMbwana Samattaarriving from Genk for £10m earlier this week. Smith could also look for more help in the final third with AC Milan’s Krzysztof Piatek, Leicester’sIslam Slimaniand Rio Ave’sMehdi Taremihave also been linked. The long-awaited move for Louie Barry from Barcelona finally went through on Thursday, a deal which could well prove the shrewdest of all this window.

With the scrap over European places and relegation escapes causing panic for a number ofPremier Leagueclubs, the urgency to bring in reinforcements before 11pm on 31 January has dawned.

Arsenalare desperately pursuing a centre-back,Manchester Unitedare still haggling over Bruno Fernandes,Chelseaface a stalemate with their preferred targets staying put until the summer, while for the likes of Southampton it’s more a case of holding on to their best players.

Our writers take a look at what each team needs and who they’re hoping to bring in before the window slams shut:

New boss Mikel Arteta is looking to freshen up his squad this month but in truth doesn’t really have the funds to do it. The Gunners are firmly in the short-term deal and loan market before next week’s deadline with PSG left-backLayvin Kurzawathe likeliest arrival. Keep an eye on departures too withPierre-Emerick Aubameyang, a loan target for Barcelona, one of a few first-team players who are wanted elsewhere.

Pierre-Emerick Aubameyang wants to join Barcelona and has “given the OK” to the Blaugrana as they look to replace the injured Luis Suarez.

The 30-year-old has been key to Arsenal remaining in the race to qualify for the Champions League, scoring 14 goals and assisting once.

The Gunners will be reluctant to sell though, given Alexandre Lacazette’s struggles and Mikel Arteta still assessing his squad ahead of a new era at the Emirates.

Chelsea will return for Moussa Dembele in the final days of the window after failing to capture Edinson Cavani.

The Lyon star has been a target previously but now the Blues may step up their efforts, with Frank Lampard desperate for a new striker, report The Sun.

The report adds the French club would demand at least £45m to sell their forward.

Inter Milan have made a breakthrough in their pursuit of Christian Eriksen.

A deal has been agreed claim FC Inter News, with €20m the final figure to convince Spurs to sell.

The report adds that the Dane will be unveiled at the San Siro on Sunday against Cagliari.

Manchester United still want a striker before the deadline, no matter their Bruno Fernandes chase.

And the Telegraph report they will make a late move for Edinson Cavani.

Atletico Madrid appear to be in the driving seat for the Uruguayan, with PSG rejecting a loan offer from Chelsea.

While Carlos Tevez is another option for United, with Tuttosport claiming the Boca Juniors star could make a sensational return to Old Trafford.

Liverpool are considering a move to sign Real Madrid’s Isco.

The Spanish midfielder would cost around £59m though, which could prove prohibitive.

El Desmarque in Spain report Jurgen Klopp really likes the player and believes he could add even more creativity to the midfield.

Fabian Ruiz of Napoli is an alternative, the report adds.