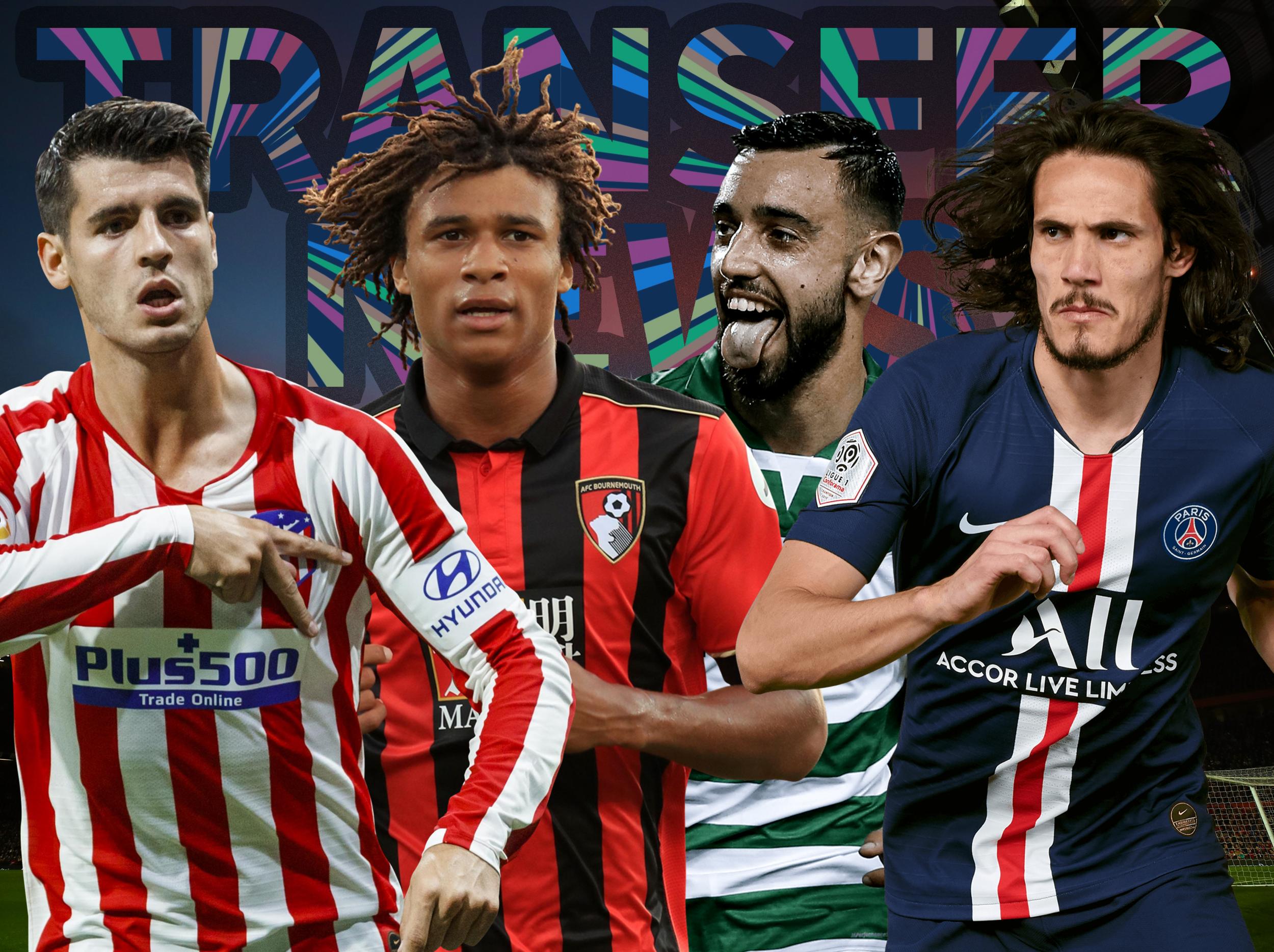 Follow live news and the latest updates as we cast our eye across all of the day’s transfer news, rumours and gossip from the likes of Manchester United, Arsenal, Liverpool and across Europe.

Manchester United and Arsenal have both been in the headlines this afternoon as they consider moves for Paris Saint-Germain’s soon-to-be departed striker Edinson Cavani. The Uruguayan is out of contract at the end of the season and available on a free transfer, and reports in his homeland suggest that offers have already been made from the two Premier League clubs along with Atletico Madrid. Chelsea meanwhile are on the hunt for a defender, with eyes on Issa Diop of West Ham and their former centre-back Nathan Ake at Bournemouth, with £40m prepared for both depending on who the club decide to focus on.

Tottenham Hotspur meanwhile are looking at Barcelona centre-back Samuel Umtiti despite long-term interest from Arsenal and United, with the France international facing a somewhat uncertain future as Barca are keen to move him on this season, while another star defender who appears to be on the market is Juventus’s Matthijs de Ligt, who despite only arriving in Italy at the start of the season is already being linked with a loan move back to Ajax after failing to settle in Turin. Follow all of the latest below.

Cavani has helped PSG win 18 trophies including five Ligue 1 titles since joining from Napoli in 2013, scoring a club-record 198 goals in all competitions.

However, the Uruguay international, who turns 33 next month, has found opportunities limited this season and is now keen to call time on his Parc des Princes stay.

Speaking after PSG’s Coupe de France win at Lorient on Sunday, Leonardo confirmed Cavani’s decision and said they had already turned down a bid from Atletico Madrid for the striker.

“We’ve always said the same thing. We hoped he would stay at the club. It’s true that today (Sunday) he asked to leave and we are studying the situation,” Leonardo said in quotes reported by the French media.

“It is also true that we had an offer from Atletico Madrid and we did not accept it. On a financial level, it was not high enough compared to the value of the player.

“We are listening (to Cavani). After that, I honestly don’t know how it will all end. Right now we are a little more distant from Atletico because we’ve not had any contact for the past few days. Today nothing is clear.”

Asked if PSG want 30 million euros for Cavani, Leonardo added: “In his case it is not a question of amount, but of desire. The player wants to leave. We are listening to see what we can do that is best for the group as well.”

Some more detail here on the future of Manchester United and Chelsea transfer target Boubakary Soumare:

Sky Sports have giddily claimed that Bristol City defender Bailey Wright is currently travelling to Sunderland for a medical.

Newcastle are set to put in an offer for Hull City’s Jarrod Bowen, according to The Telegraph.

Steve Bruce has been a fan of the 23-year-old since last summer, and is once again attempting to land the forward, who has scored 16 goals in 27 appearances in the Championship so far this season.

Hull are asking for more than £20m, so it remains unclear at this stage if the two clubs will be able to reach a deal for Bowen.

Frank Lampard this weekend appeared to suggest the club will be looking to sign a striker this weekend.

“When we attack and spend a lot of time around the opposition’s box, we have chipped in with some goals from midfield and have people who can arrive from midfield, but the broader reality is that we need more goals from the front line.”

Eriksen has been linked with a move to Inter Milan since the summer with it being reported in Italy that the Dane has already agreed personal terms with the club.

Last week, Mourinho criticised Inter for talking publicly about Eriksen’s future, but Conte has hit back for the way in which his words have been “amplified” and “twisted”.

“I no longer talk about the transfer market,” Conte said. “The last time I did it, someone we all know twisted my words so I won’t say anything anymore.

“I never said anything unusual about the January transfer market making it difficult for all coaches. Every time I say something, it always gets amplified or twisted.’

Inter Milan’s CEO Giuseppe Marotta meanwhile confirmed that his side want to sign Eriksen but this weekend said he is unsure exactly if or when the playmaker will move to the San Siro.

“Eriksen is a Tottenham player, but his contract expires in June, so it’s entirely legitimate and authorised to see his agent in this period,” he told Sky Sports Italia.

“That’s a long way off saying he’ll come here in January or June, because there is a great deal of competition and we don’t know what will happen yet.”

Manchester United want to sign 16-year-old wonderkid Jude Bellingham from Birmingham this month – but have been reportedly put off by the Championship side’s high valuation.

The Athletic claim that the Blues want £25m for the midfielder and report that another sticking point is Bellingham’s demand for first-team football, having already become a senior player at St Andrew’s.

“We always said the same thing for Cavani,” he said. “We hoped that he would stay at the club. Today, he asked to leave. We are studying the situation.

“We had a proposal from Atletico Madrid. We did not have a proposal worthy of the player’s worth. [But] I’m not sure Cavani will be here in February.

“Today, there is nothing [to say he will leave]. But he has made the proposal to leave. We’ve never thought about selling him before.

“We will see how it turns out in the coming days, but we are listening to Cavani because we respect him. It’s a little clearer now, with him at the end of his contract.”

Liverpool reportedly have plans to snap up another youngster.

RMC Sport claim that Liverpool want Nice wonderkid Pedro Brazao to be their third signing this month – after deals for Takumi Minamino from Salzburg and striker Joe Hardy from Brentford.

The Sun this weekend claimed that Crystal Palace have moved ahead in the race to sign Hearts left-back Aaron Hickey.

The reason? Palace are happy for the 17-year-old to return to Tynecastle on loan.

PSG are primed to spoil both Arsenal and Manchester United’s transfer plans.

The Daily Mail claim that the player now wishes to join Paris Saint-Germain from Napoli instead of heading to the Premier League, with the French side ready and willing to offer him a cool £10.2m a year.

“Moses is definitely a candidate,” he said this weekend.

“Eriksen is a Tottenham player whose contract expires in June. The fact of having been to dinner with his agent is legitimate, authorised by current rules and therefore not limited.

“From here to say if he will arrive in January or June, there is competition and we don’t know what is going to happen.

“I do not deny that we spoke with Giroud’s entourage and now we will make the right assessment. The two operations – this one and that of [Matteo] Politano – could be linked but what does not happen today in the market can happen tomorrow.”

Think Manchester United can solve all of their problems by dipping into the transfer market this month? Then you’re WRONG.

I’m a huge fan of one of the transfer tidbits in SPORT this morning: Inter Milan reportedly want to snap up Luka Modric from Real Madrid.

The Spanish outlet report that 34-year-old Modric – who will be a free agent in January 2021 – is increasingly open to leaving the Bernabéu and that Real will not block any move, out of respect for the midfielder’s loyal service over the years.

Modric and Christian Eriksen in the same midfield – what a glorious thought.

Somebody sound the strangest rumour of the day klaxon [🚨🚨🚨]: The Telegraph have this morning claimed that Spurs boss Jose Mourinho wants to sign Leicester City flop Islam Slimani.

The 31-year-old is currently out on loan at Monaco where he has banged in eight goals in 11 starts – after managing 8 in 35 for the Foxes.

And that has reportedly convinced Mourinho that the big Algerian is the man to temporarily replace Harry Kane, rather than AC Milan misfit Krzysztof Piatek.

Some long overdue good news for Arsenal supporters: France Football this morning claims the club have agreed a deal for a new player.

They report that Paris Saint-Germain defender Layvin Kurzawa – who has also been linked to the usual home of washed-up old PSG stars, Tottenham Hotspur – has agreed a deal with Mikel Arteta’s side and will join on a free transfer at the end of the season.

Lille midfielder Boubakary Soumare – who has been linked to both Manchester United and Chelsea this window – has insisted to L’Equipe that he will not leave Ligue 1 side Lille this window.

He said: “I want to do a full season, yes. I feel good, my team-mates are helping me. It is not time to leave. I don’t want to leave with regrets.

“Yes, of course [I would like to leave], I have already discussed with the coach. I told him very clearly. I have a very clear idea of ​​where I want to go in my career. I know where I am today. And that suits me.”

Paul Pogba has reportedly been contacted by his old Juventus teammates as they attempt to lure him back to Turin.

According to Italian outlet Tuttosport, Juan Cuadrado, Paulo Dybala and Gonzalo Higuain have all reached out to the Frenchman and are desperate to see him return to Italy.

The trio are supposedly talking to Pogba via WhatsApp, with the midfielder’s future at Manchester United still up in the air.

A story published in The Mirror yesterday morning and now doing the rounds in the foreign press is that Liverpool are set to revitalise their interest in RB Leipzig striker Timo Werner.

The £60m man was previously a target for Arsenal and has also been linked with Chelsea, who it was claimed earlier this month had already opened negotiations with the 23-year-old.

However, The Mirror claim all this rival interest in Werner has spooked Liverpool into action, with the club now accelerating their initial plans to sign him in the summer.