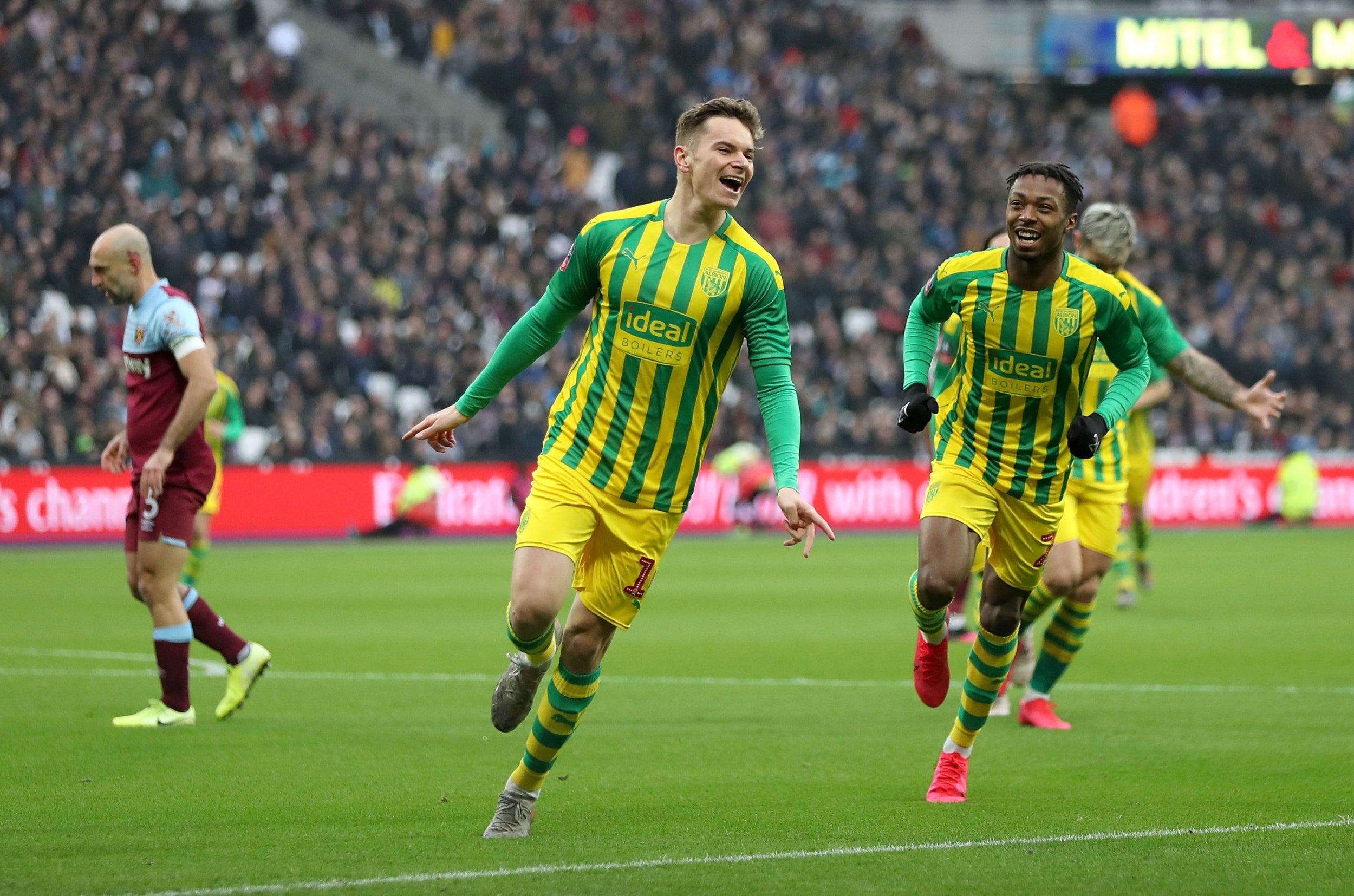 West Bromwich Albion’s 1-0 victory over West Ham United at the London Stadium in the fourth round of the FA Cup confounded expectations. Both sides have bigger issues on their minds than the Cup. Albion are top of the Championship and chasing promotion to the Premier League. West Ham are one place above the top-flight’s trapdoor.

Yet it was clear that both sides wanted to win. Conor Townsend’s goal gave Slaven Bilic the satisfaction of beating his former club but David Moyes can take heart from his team’s second-half performance. West Ham showed spirit after an abject first half when the home side were inferior to their second-tier opponents by a significant measure.

Bilic’s team selection – eight changes from Monday’s 1-0 defeat by Stoke City – might have made it appear that he was not taking the game seriously but Albion started brightly and got their reward early. Just nine minutes had gone when Charlie Austin found space to shoot from the edge of the box but aimed his effort straight at Issa Diop. The defender could not get his feet in position quickly enough and the ball rebounded to Townsend, whose shot was placed beautifully into the far corner of the goal from just inside the penalty area.

Filip Krovinovic was controlling the tempo throughout the first period. The away side fashioned another chance when the midfielder started a move on the left and gave Kyle Edwards the opportunity to cross. Krovinovic got on the end of it and headed just wide but it was a real scare for West Ham. The Croat’s link play with Edwards was causing Pablo Zabaleta all manner of problems. The first-tier side were definitely second best.

Moyes has been hampered by an injury crisis and the Scot made four changes. It took West Ham until 25 minutes to create even a half chance. Aaron Cresswell worked his way to the byline and cut back a cross for Sebastien Haller but the Frenchman clipped the ball wide.

Albion should have made it two when Declan Rice gave the ball away to Dara O’Shea deep in his own half. O’Shea picked out Austin in acres of space but the striker headed wide. Rice tried to make up for his error with a shot from 25 yards but the ball fizzed wide of the goal.

West Ham were so dreadful in the first half that Moyes gambled by introducing all three substitutes at the break. Angelo Ogbonna, Michail Antonio and Mark Noble replaced Fabian Balbuena, Pablo Fornals and Carlos Sanchez. It did not help much initially. Krovinovic fired wide and Austin forced Darren Randolph into a diving save. Austin was enjoying himself, backheeling in the opposition area as Albion piled on the pressure.

West Ham were beginning to come into the game, though. Antonio gives the side pace and directness and the winger surged forward after a cleared corner and had provided Bilic’s defence with their first really uncomfortable moment. Moyes’s team began to see more of the ball but they were operating like a side shorn of confidence. Cresswell miscontrolled on the line, surrendering a throw-in and ending what could have been a promising attack. Haller exuded little self-belief. Albian Ajeti teed the striker up in the area but the 25-year-old screwed the ball wide and the lack of conviction was evident.

Manuel Lanzini had been quiet for the first hour but with West Ham beginning to dominate possession the Argentinian began to find space. He clipped a pass into Ajeti in the box but the header by the Swiss drifted wide.

Noble’s industry was having an impact. He got closer to Krovinovic and pressed the Albion midfield. They were no longer having it all the own way.

Ajeti’s running was causing problems and the 22-year-old panicked Semi Ajayi into a pointless foul that earned the Albion man a second yellow card with 18 minutes left.

West Ham piled on the pressure but too often they were forced to take pot-shots from distance. Lanzini, Noble and Ogbonna all fired wide from outside the box as desperation overrode craft in the final minutes. It took Moyes’s side 85 minutes to get an effort on target but Haller’s header was as meek as his earlier shot.

Rice forced another save from Jonathan Bond – again from long range – as the final whistle approached and West Ham appealed for a penalty a frantic finale. The home team’s best chance fell in stoppage time when Antonio picked out Noble in the area but the midfielder blazed over.

Moyes can now concentrate on Premier League safety. Bilic still has ambitions on two fronts. The FA Cup meant something to both managers.