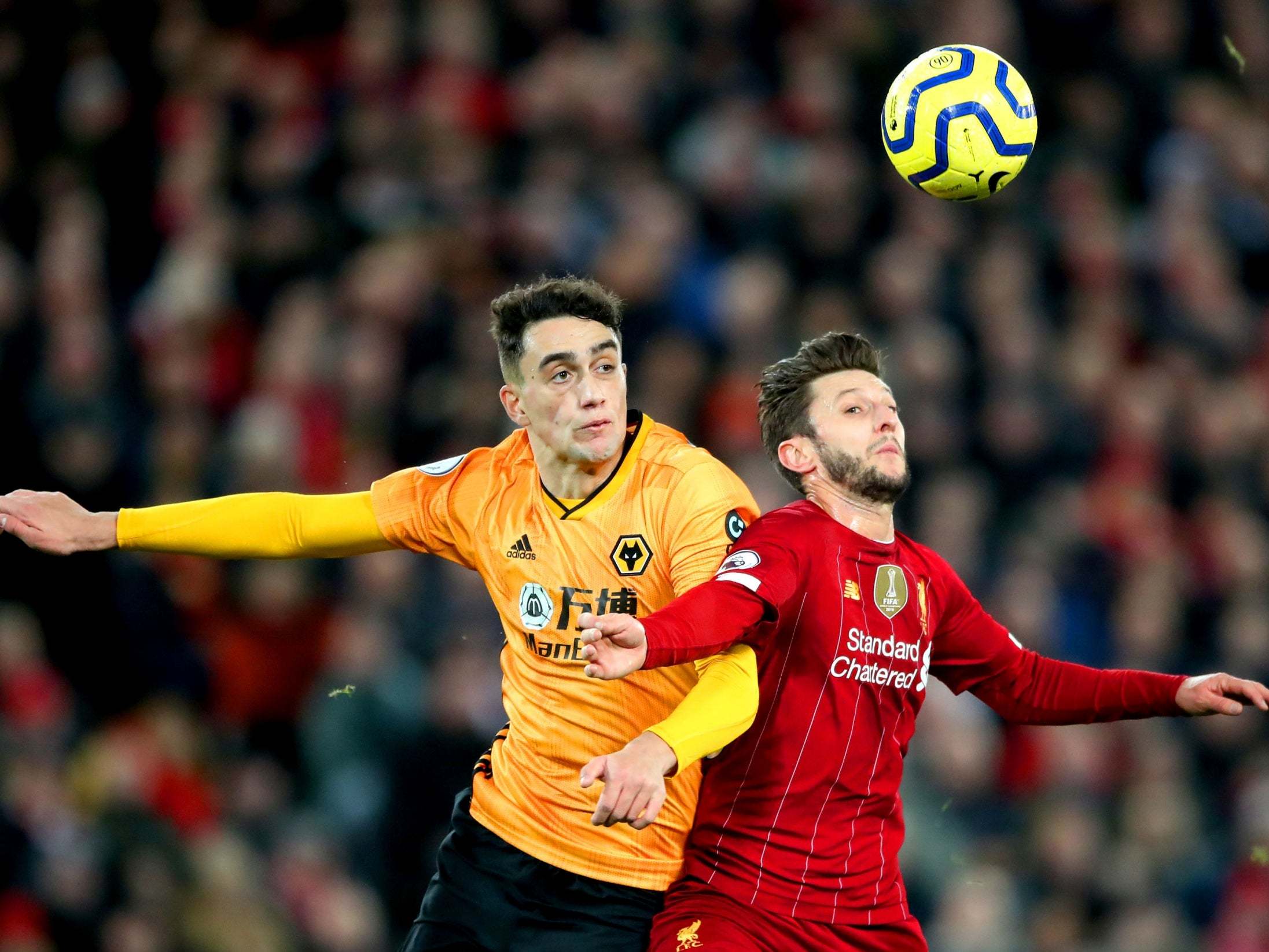 Follow all the action live as Liverpoollook to end their unbeaten run in a tricky fixture atWolves.

Jurgen Klopp’s side have dropped just two points in the Premier League all season and are riding the momentum of their recent victory over Manchester United.

Their status as champions-elect is a virtual certainty, however, Nuno Espirito Santo’s side will provide a stern test. Wolves sit in sixth, hunting down a place in the top four, and already boast a victory at home over Manchester City this season. Follow all the action live below:

35:The attacking handball law is a weird one, isn’t it. Henderson boots the ball into Neto’s arm as the Wolves forward tries to take down a long pass and Liverpool get a free kick…

32:Oh no, this is sub-optimal for Liverpool. Mane is on the deck with nobody around him and heads straight down the tunnel. You suspect that’s a muscle injury.

31:Liverpool have done that thing where they tighten up and look to hit teams on the counter attack when they score. It’s a really effective plan and you can see here how Wolves are struggling to break them down. However, for the neutral it’s not great in terms of the entertainment value. If anything they’ve score too early.

28:After a lengthy-ish stoppage Neves is back on his feet and play continues.

24:Ruben Neves is on the deck after a late tackle from Mane, who actually wins the ball but takes a chunk of the man too. The midfielder is going to need a bit of treatment on the pitch.

24:It’s all gone a bit scrappy and there’s no sign of either side lowering the intensity. The energy levels are, you could say, that of a cup tie.

21:Wowee what a pass from Oxlade-Chamberlain to set Mane free. The forward can’t quite get the ball under control and Dendoncker is on-hand to tidy up and clear.

17:Van Dijk goes to ground in last-ditch fashion and Jimenez ends up on the deck. The Wolves supporters appeal for a penalty, but the referee waves play on.

Liverpool then break and Salah twists and turns himself into a scoring position, but has a shot blocked.

13:There’s such a buzz whenever Traore gets on the ball, and with great reason. He has Alexander-Arnold and Gomez on strings on that right wing. We’re just waiting for something to come of it.

10:Traore is having some joy against Alexander-Arnold and wins a corner after some nice skill.

The corner is cleared but Wolves recycle possession and the second cross is headed wide from Doherty from very, very close range. You fancy him to score there.

What would a goal in the Premier League be without a VAR check?

The referees locked in a shed somewhere in Hartfordshire are checking to see if that was handball…nope. The goal stands.

The Liverpool captain makes a late run into the box from the corner and shoulders the ball past Patricio at the near post. Another assist for Alexander-Arnold.

6:Salah’s fallen over and Liverpool have a free-kick on the edge of the area. Big Virg, Salah and Alexander-Arnold interested.

The latter takes it and wins a corner off the wall.

4:Wolves have a free-kick, Joe Gomez pushes over Jonny (not a foul according to Steve McManaman…shock)

The ball to the back post gets past most of the defence and Alexander-Arnold just about clears in time.

Liverpool begin the game by kicking the wind bag before Wolves do!

Anyone know which team Conor Coady supports? Not seen anyone mention it, you’d think BT Sport may have at least touched on it.

(For those unaware of the terrible, terrible attempt at banter, he is, of course, a Liverpool fan)

Incidentally, Crystal Palace were the last team to beat Liverpool at Anfield.

91 points from a possible 93 in their last 39 Premier League games, which they’ve been unbeaten. All kinds of records in their sights.

Please allow a moment for the blog to load.

What time is the match?

The match will kick off at 8pm at Molineux.

The match will be broadcast live on BT Sport 1 and BT Sport Ultimate.

Ruben Vinagre will miss out with a hamstring problem but Diogo Jota and Willy Boly could both be involved in some part after time on the sidelines.

Naby Keita, James Milner and Xherdan Shaqiri are all long-term absentees for Liverpool while the game will likely come too soon for Dejan Lovren, despite the Croatian defender returning to training this week.

There may be few tougher tests of Liverpool’s unbeaten record than at Molineux with the home side already seeing off Manchester City on their own patch this term. That said, the Reds remain irresistible and while it will prove trickier than the win over United they should again taste victory here. Wolves 0-1 Liverpool